Binder attatchment– a wonderful gadget that folds and stretch the binding for you. Saves time and energy!

FaQ
Single or double fold?
Depends on what you sew. And what you like! So what is the different?

Settings: these will vary depending on your machine and the fabric you are using.

When using one or two needles (or three with coverstitch), it’s important that the final seam has enough stretch. Try lengthening the stitch length to 4-5mm, a fairly high needle thread tension and adjust the foot pressure. Change only one setting at a time and experiment to find what works for you and your machine. Take notes to refer to.

Get to know your machine, change a setting at a time, and test the samples!

If the band is stretched and wavy, your stitches are probably too short. If the binding is pulled up and folds inwards, it is most likely that the band is too wide or too thick. Try removing the band from one or more curves of the tensioner. Test yourself and don’t give up!If the binding does not feed through the binder properly, try widening the bracket at the front (the two ‘fingers’ where the band exits the binder) by adjusting the two screws on the top of the binder – one almost at the far end and the lower one slightly further in.

The binder is attached with adhesive (sticky putty, blu-tack) tape or screws in front of the presser foot. If it is crowded, you can fold the tensioner forwards or backwards, or you can place the entire assembly slightly at an angle.

Fold the tensioner (the serpent-shaped wire) away. Cut the strip so that one edge is pointed and feed into the binder as shown from back to front. You can use a needle or tweezers to help it through.

Then, just try to find out which settings work best with your machine. You can use tweezers to steer the fabric at the beginning. You can also put a block, for example a Lego block to the right of the presser foot – that prevents the band sliding to the right when sewing tight turns

It is highly recommend to sew using test pieces before sewing the first garment, make your mistakes and adjustments on the test piece!

Sew smoothly and steadily at the beginning, make sure that the band does not fold or get stuck and become too stretched. For sharp curves and turns, I steady the strip manually with a pair of tweezers. If that is not enough, I will stop before the turn begins, put down the needles, lift up the presser foot, turn the fabric around and put the presser foot down. Repeat as needed. Avoid pulling the fabric.

Take your time and find the right settings for your machine. Keep trying and don’t give up! 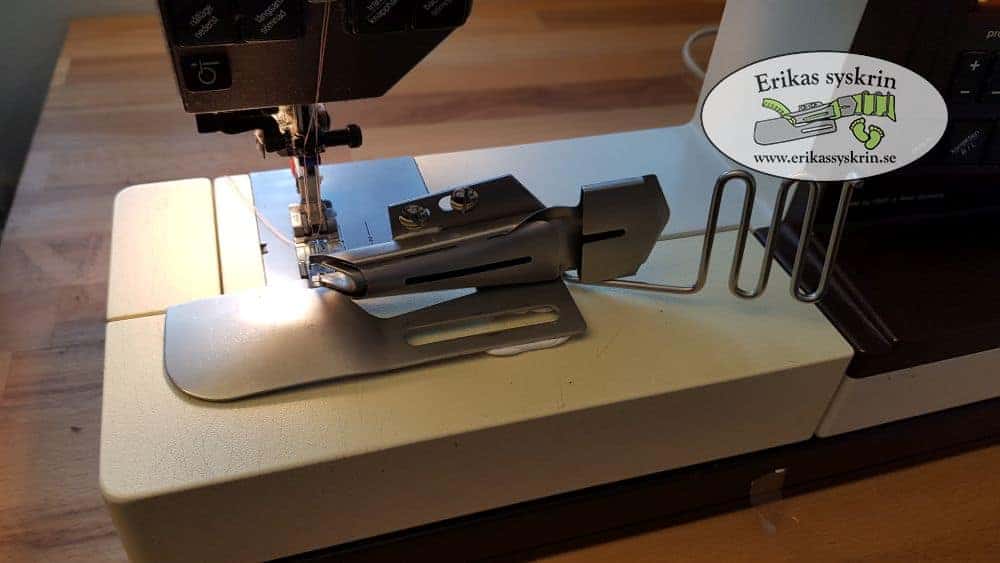 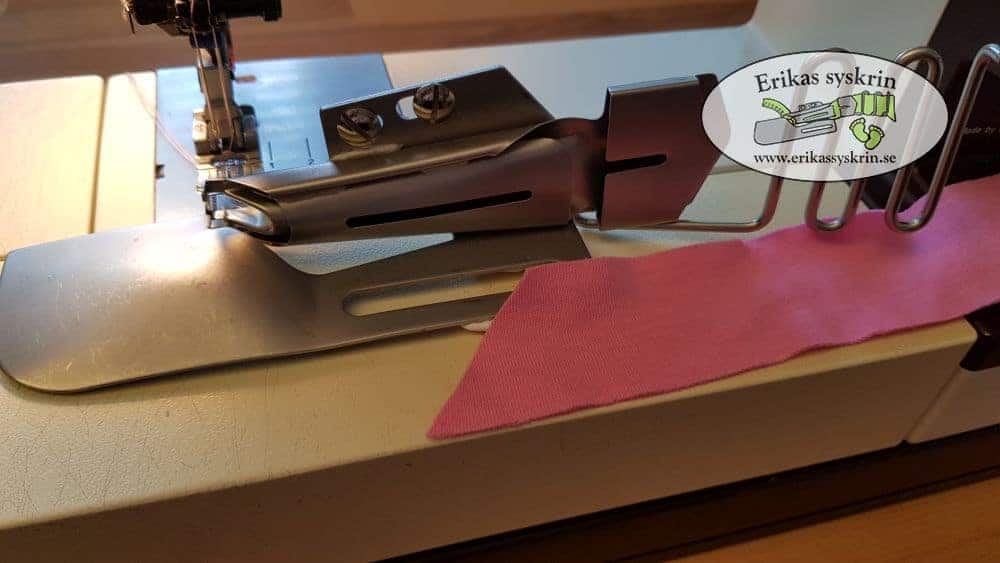 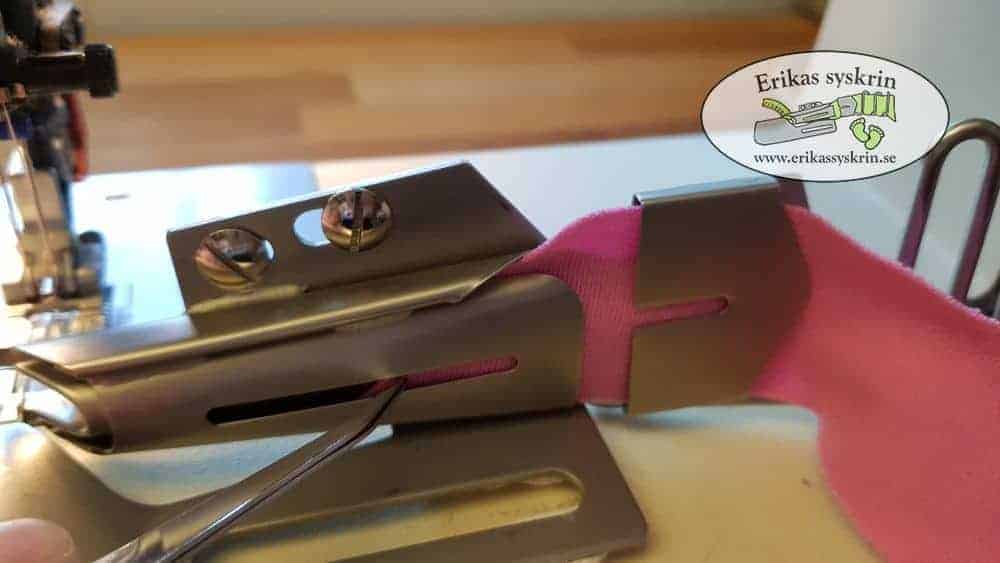 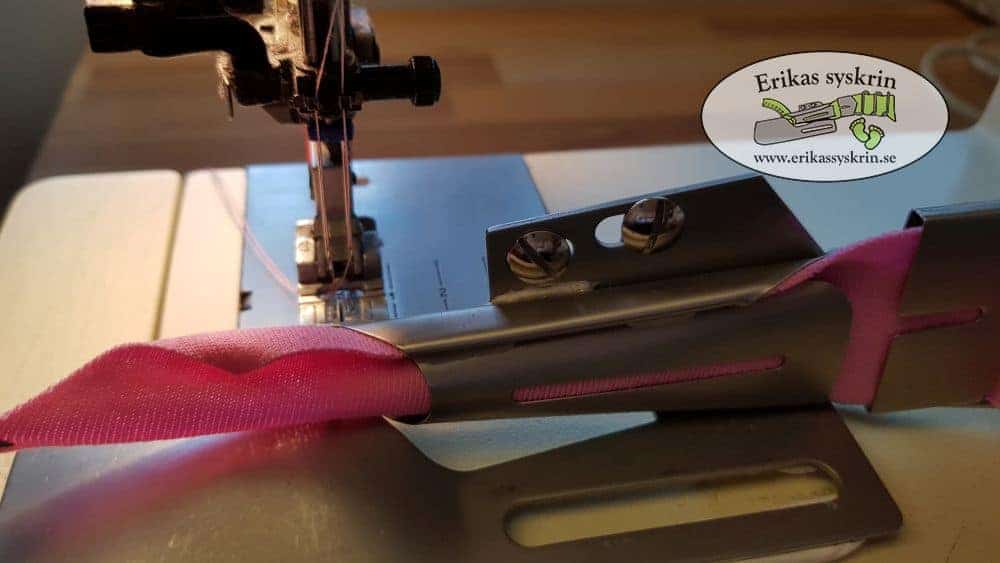 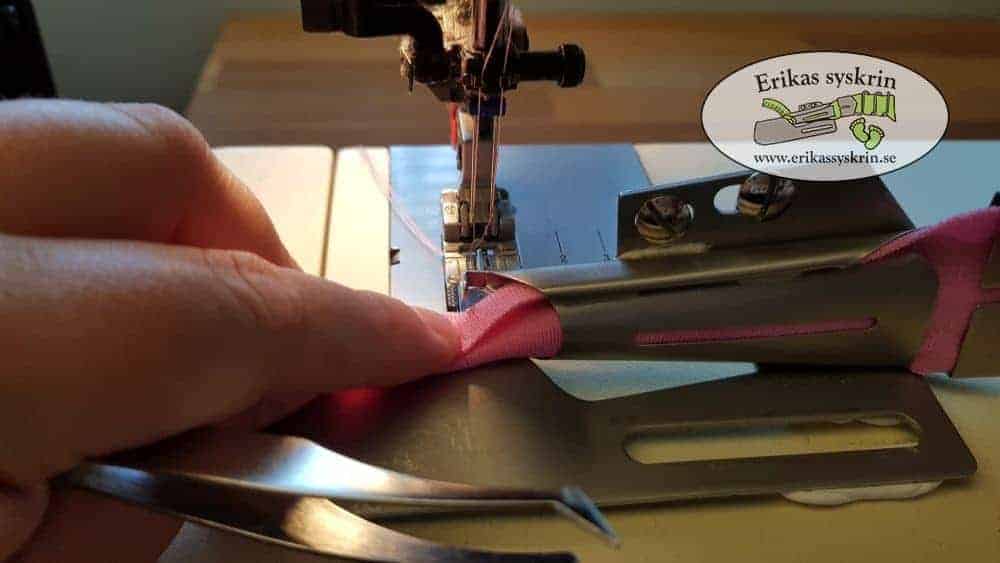 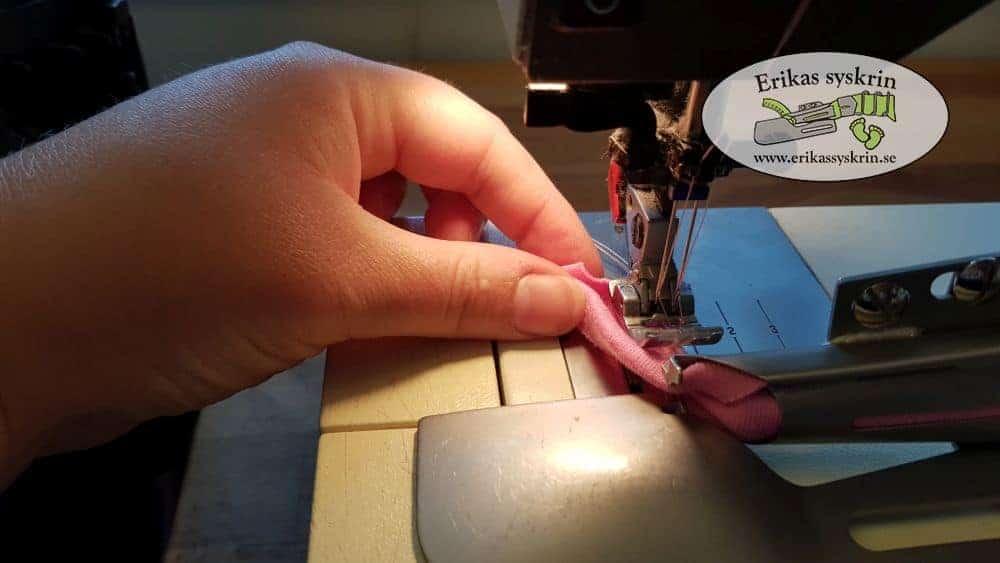 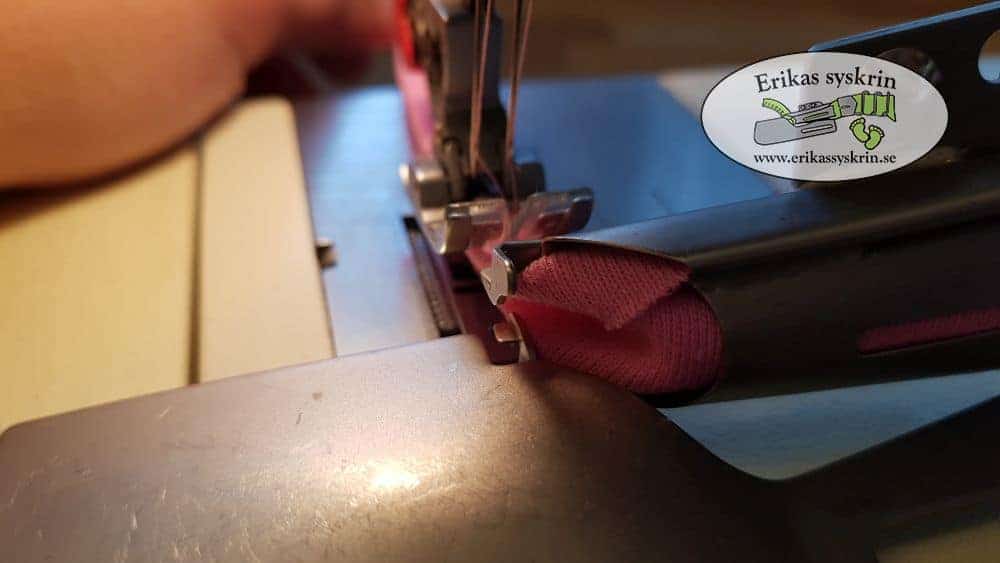 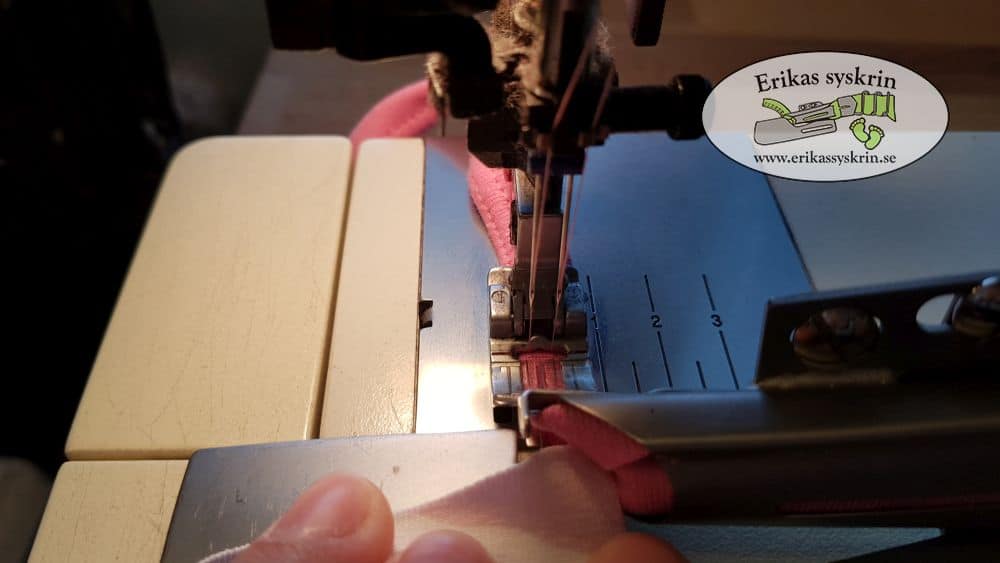 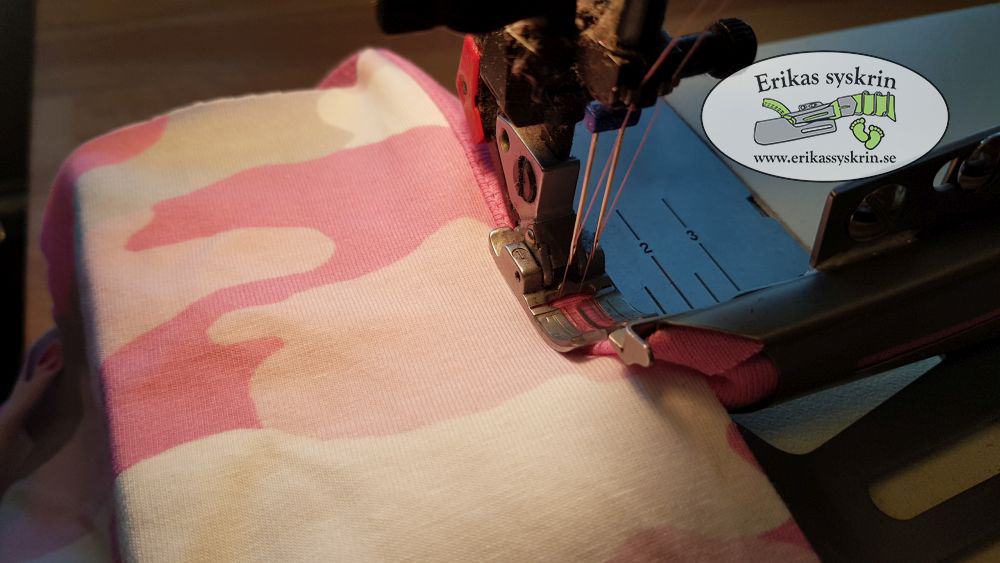 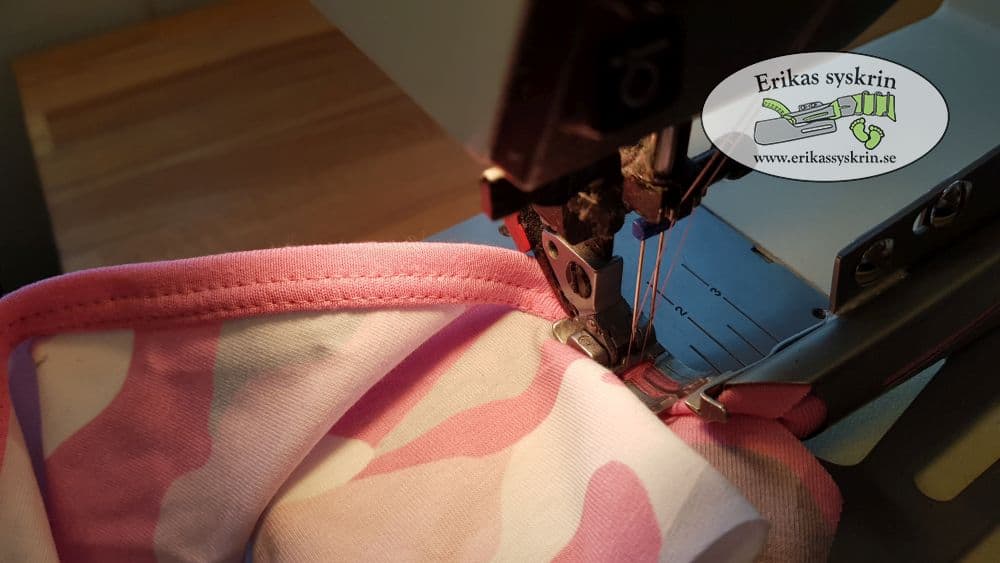